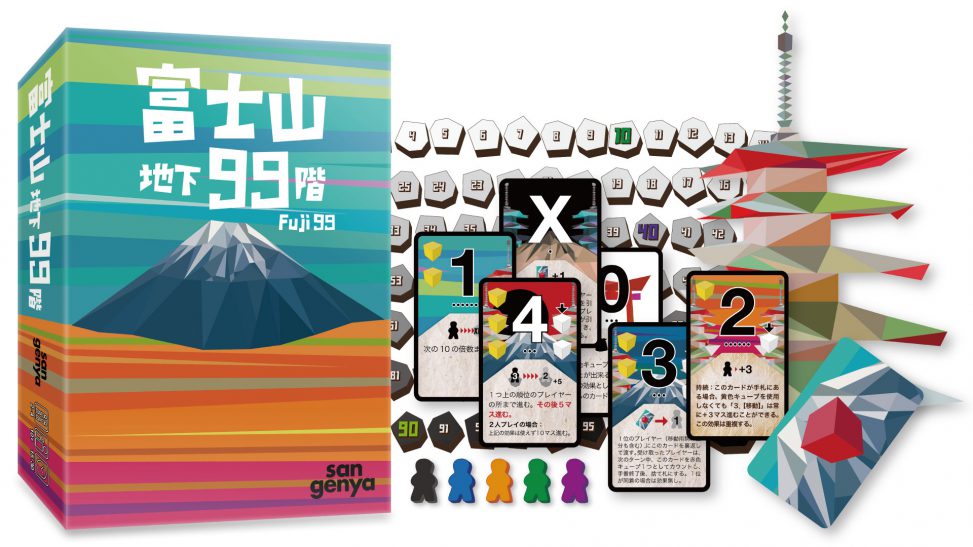 This game is supplied with Story Books that can be read only by the winner. Read these Story Books according to the rules and make sure not to read them before playing the game.

The players can move their tokens according to the cubes they randomly draw from the bag. The Red cube indicates [Danger]. If you draw the Red cubes up to the specified number, your turn ends without advancing your player token. You can draw a Fuji card on each of your turns. Some Fuji cards can be used to your advantage while the effects of some Fuji cards are applied to all the players. However, if you keep too many Fuji cards in your hand and the total values on the cards reach the limit, your turn ends without advancing your player token, just like in the case of [Danger]. Cleverly cope with [Danger] and the hindrance from other players and head for the 99th basement floor of Mt. Fuji!

Spread the game board in the center of the table. The players each choose their color from among the 4 colors (Blue, Green, Purple, and Orange) and receive the summary sheet of that color. Place the player tokens of chosen colors and black Movement token at the starting point (⑥) on the game board. The Movement cube is used on each turn to indicate the player’s movement before completing the move. The Movement token is shared by all the players. Each player receives 1 bag, 6 transparent cubes, 4 Yellow cubes, and 4 Red cubes. Each player then put all the cubes into the bag and shake the bag to shuffle the cubes inside it. Place all of the remaining transparent cubes on the Five-Storied Pagoda (① as shown) on the game board. Place the number of yellow cubes matching the number of players (Ex. 4 cubes in a 4-player game) on “20” (②) and on “50” (③). All of the remaining cubes and player tokens will not be used, so put them back into the box.

Shuffle the Fuji cards to form a deck and place the deck face down on Mt. Fuji (④) on the game board. This deck of Fuji cards is used as the draw pile for all the players. Use the spot indicated (⑤) as the Fuji card discard area.

The players take turns in clockwise order starting from the player who has most recently visited Mt. Fuji. On your turn, take the following actions. You may not pass your turn without taking the actions.

3. [Move]: Count the number of cubes you have drawn and move the token.

You can use the Fuji cards in your hand. You can use your Fuji card by placing the Yellow cubes you have drawn from the bag by spending the “Yellow cubes for using the card” (Fuji Card Description ①) stated on the top left corner of the Fuji card. Place the Yellow cubes you have spent in the Used Yellow Cube Area on your summary sheet and apply the effect stated on the Fuji card. If Movement is triggered by the Fuji card, move the Movement token in the same way as stated in “3. [Move]”.
When you use a Fuji card, if the card has any transparent cubes on it, put the cubes into your bag. Discard used Fuji cards face up in the discard pile (⑤). You can use multiple cards, but you cannot use the same card multiple times.

Draw a Fuji card from the deck (④) and place it face up in front of you as your hand. If the deck runs out of cards, shuffle the cards in the discard pile (⑤) and form a new deck with them.

Add up the values on all the Fuji cards in your hand (Fuji Card Description ②). If the value is 7 or more, you have overdrawn the cards. Pass the turn and Movement token to the next player. Then discard all the Fuji cards in your hand to the discard pile (⑤) and return the transparent cubes on those Fuji cards to the Pagoda. Due to the effect of the card “X”, Your Fuji card values may add up to 7 or more at the start of your turn. Even in such a case, count the card values only at this step.

[What to Do at the End of Your Turn]
Put all the cubes except for the transparent cubes on the Fuji cards back to the bag and shake the bag to shuffle the cubes. 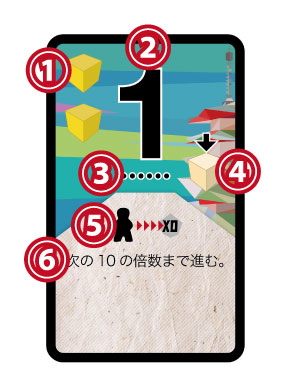 ① Yellow cubes for using the card
② Value counted in [Crisis]
③ The number of cards with the same value (Ex. The 6 black dots on the Fuji card with the value “1” indicate that there are 6 cards of the same value.)
④ The number of transparent cubes that can be placed on the card
⑤ Icon indicating the card effect
⑥ Card effect: The card effect is applied when it is used, when it is drawn (“Immediate”) or continuously while it is in your hand (“Continuous”). 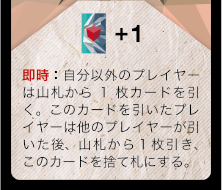 If you have drawn this Fuji card, draw another Fuji card after all the players have taken turns to draw a Fuji card, and then discard this card to the discard pile. 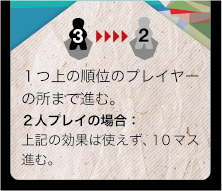 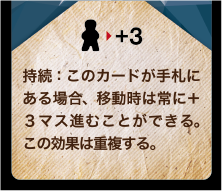 The effect of this card is applied only in “3. [Move]”. This card does not have any effect when used. Only this card has the color on the background of the icons and text slightly darker. 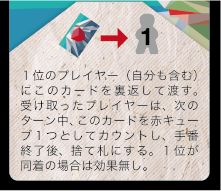 If you receive a card by this card’s effect, place it near the Red Cube Area on your summary sheet so as not to forget applying its effect at the time of [Crisis] counting. If there are 3 of this card in the Red Cube Area, count them as 3 Red cubes and end your turn. You cannot apply the effect of the card “You can return 1 Red cube to the bag” in order to discard this card. 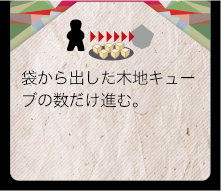 Regarding the effects of other cards, just check what is written on them.

The game ends when the Movement token reaches the 99th basement floor (indicated by “99” on the game board), and the player who has moved the Movement token there wins. (There is no scoring of Fuji cards, etc.) The winner can read the Story Book they chose at the start of the game.

There are also additional Story Books for sale. For further information, see our website. 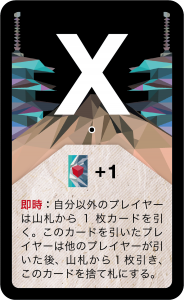 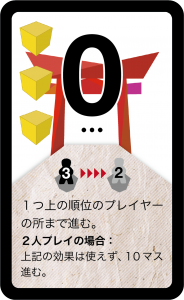 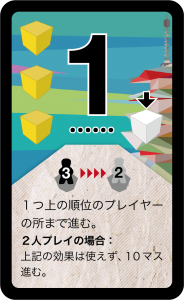 Advance to the same position as the player ranked one place above you.
2-player game:
You cannot use the above-stated effect. Just advance 10 steps. 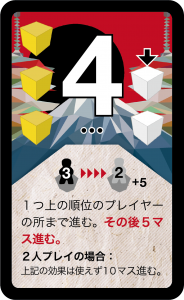 Advance to the same position as the player ranked one place above you, and then advance 5 steps.
2-player game:
You cannot use the above-stated effect. Just advance 10 steps. 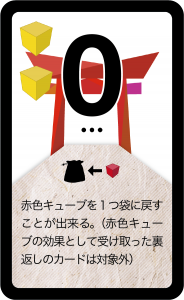 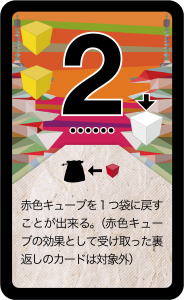 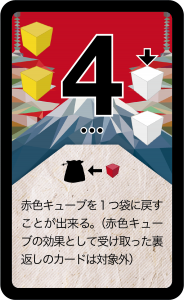 You can return 1 Red cube back into the bag. (You cannot return the face down card received that counts as a Red cube.) 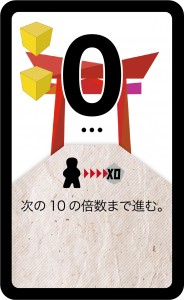 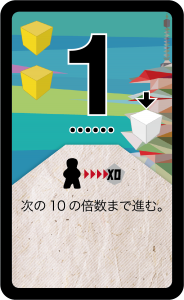 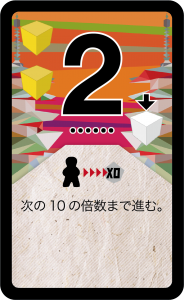 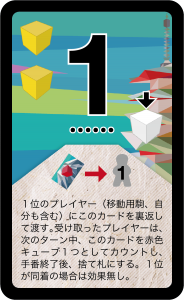 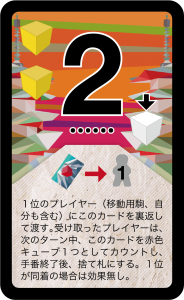 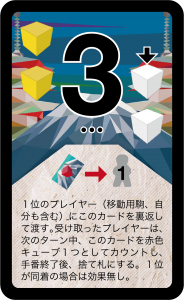 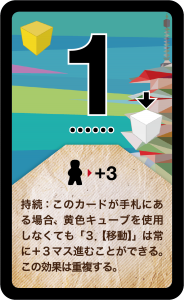 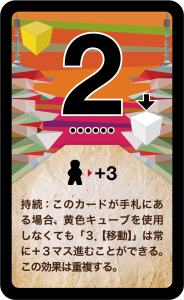 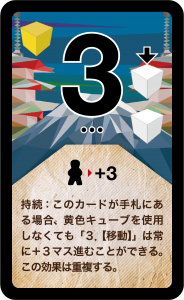 Continuous: If you have this card in your hand, you can advance with 3 additional steps in “3. [Move]” without using Yellow cubes. If you have two or more of this card, their effects are added up. 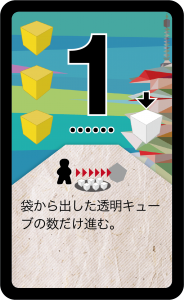 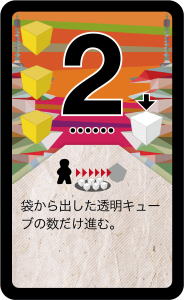 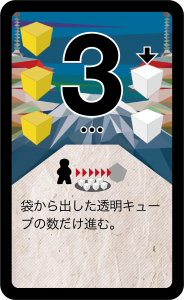 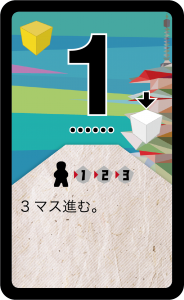 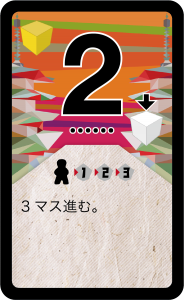 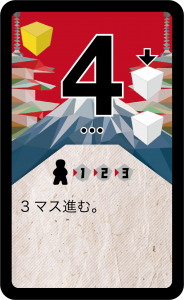